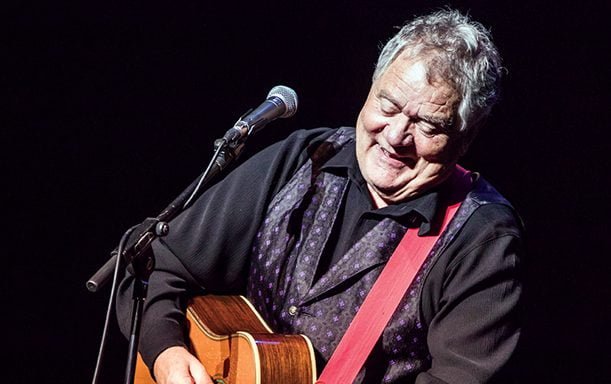 Max Boyce in conversation to celebrate the publication of Hymns and Arias: the best of his selected poems, songs and stories by Cardigan publisher Parthian Books
When ‘Hymns and Arias’ rang out at Cardiff Arms Park some fifty years ago, those great Welsh anthems ‘Calon Lân’ and ‘Cwm Rhondda’ had found a companion and the valleys of south Wales had produced a new folk hero.
He captures the spirit and the story of the people of Wales with a warmth and charm that has made his words and music resonate with a worldwide audience. There is only one Max.
From his early days touring the folk clubs and small concert halls of his native south Wales to sell-out shows at some of the world’s most iconic venues, including the Albert Hall, the London Palladium and the opera houses of Sydney and Durban, Max has become an original and treasured performer whose songs and stories have become part of folk culture. His albums, including the No. 1 album We All Had Doctors’ Papers and the iconic Live at Treorchy, have sold in their millions and earned him several gold discs. His greatest influence has always been the Valleys of Wales, with their inherent warmth and humour, their sadness and passion, and he has the remarkable ability to heighten, to an art form, the ‘hwyl’ that attends his nation’s national game: rugby union.
Compiling – in some instances for the first time in print – the very best songs, poems and stories from across his celebrated career, Max Boyce: Hymns & Arias is the definitive selected work of a major cultural figure who, through his inimitable humour, uniquely Welsh pathos and masterful wordcraft, has defined a nation and its people for more than half a century.
“uproariously and happily unique.” – The Listener

Get discounted tickets, access to vip packages & be the first to find out about new events.